Market intellectuals may attribute yesterday's crash to anything of the following reasons:
But the writing on the charts was clear on Friday itself - closing above 39580/11681 would require a massive Bull effort which would be nearly impossible given the already sharp run-up.That is the reason we brought NIFTY September Puts as a BTST trade on Friday itself.
The level of 39015 (11515) was a part of the trendline which was supporting the markets from ~20th August. Having broken that trendline support, the markets are in for further weakness before stabilizing.
Continue to remain short on the NIFTY, while taking a stock-specific view.
Do not get fooled or carried away but any bounce/rise. The resumption of the uptrend is a few days/weeks away. 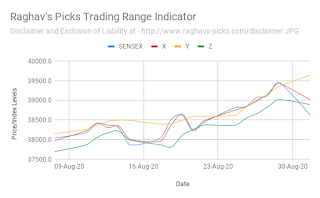 By reading this, you are agreeing to the Disclaimer and Exclusion of Liability at http://www.raghavs-picks.com/disclaimer.JPG

Sent from Mail for Windows 10

Posted by Raghvendra N Dhoot at 08:08